I went into Frank Beddor’s The Looking Glass Wars with some trepidation.  I’ve never been one for the Alice in Wonderland universe.  I find playing cards quite personality-less and grinning cats are somewhat less than charming.  But it’s more then that.  Even as a child, I could not enjoy books with children in peril, no adult protection, and lost in realms where there were no rules outlining how they could survive themselves. Charlie and the Chocolate Factory is another book that freaked me out.  When I initially read Holes, that too was lost on me (I’ve since come around to the glory of that one, however).

So when I opened up Beddor’s version of the familiar chaotic tale, I was concerned by what awaited.  My 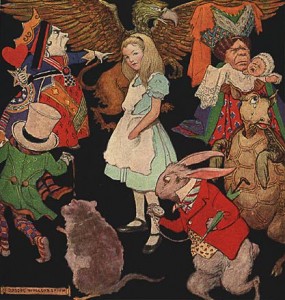 concern dwindled, however, as the victim Alice was replaced by the deeply rich character of Alyss.  Whereas Alice, Lewis Carol’s dainty and vulnerable protagonist is set upon by a variety of far-more-interesting-and-creepy-surreal-like characters who threaten her return back to the world of rules and tea in 1800s England, Alyss, on the other hand, exists in Wonderland as a coming-of-age agent of White Imagination who is lost in 1800s England and is confused about the rules we as readers fully understand.

It’s a brilliant decision to parallel the worlds of Wonderland and Earth in such a way that merely the creation of this “White Imagination” vs. “Black Imagination” theme at least explains the chaos that allows it to make sense.

It reminds me a little of Piers Anthony’s Xanth novels with their obvious parallels with the mythical world and that of 1980s Florida.

So what should I, the teacher, use it for?

The Looking Glass Wars is a dark and edgy, and even somewhat violent, take on an old tale.  But it has brushed off the dust and spun an entirely new tale: one chocked full of strong female characters (both good and evil), a truly brilliant Han Solo-type in the Hatter Madigan (the bodyguard/assassin), great plot, and excellent examples of setting.

Another element that I should point out is that it has very specific and detailed action scenes, such that you can see where the blade is being swung, the direction and velocity of punch, and the swift escape or stand-off.  Great examples of show, not tell going on throughout this book. 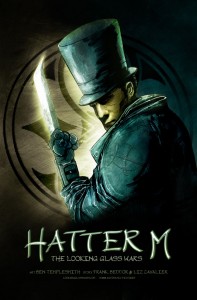 But note that this book is not for the feint of heart.  It is PG-13 at least and while a teacher could read experts to make a point and to front-load a lesson, it should not be recommended to the very young or delicate of readers.

Wave the banner of literacy and enjoy.

« Too Metacognitive to Think Properly
The Carnival #178 is in town! »