So I looked at my 8th grade students’ scores after they took the MMA and sighed.  Their scores sucked.

I did it all.  I covered the standards.  I did the test prep reading comprehension activities.  I used multiple intelligences as a guide in how to differentiate instruction.  I used peer collaboration.  Student Choice, teacher choice, and small group choice.  We found Golden Lines that reflected the 6 Traits.  We mimicked author’s strategies in our own writing.  We peer revised and edited and sentence combined.  So I was stumped.

But I clearly couldn’t solve the problem without bringing in the students themselves.

So each class looked at their own data and each student looked at their individual data.  I shared with them my own frustrations of teaching in ways that may or not have reached them.

They wrote reflections on those they got wrong and determined why the correct answers were right.

And then, on a lark, I handed back their packets so they could see what letters they circled before they bubbled.  It was like the whole room fell silent with each class as the inevitable crept into their brains. 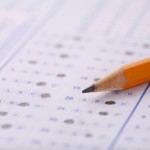 “Mrs. Wolpert.  I think there was something wrong with the test.”

Needless to say, there was nothing wrong.  In a massive moment of realization, we all concluded the following: bubbling is a skill and we sucked at it.

Sounds stupid, I know.  But clearly, we all needed the wake up call to use our bubbling power carefully.

My students could think critically.  They could write persuasive essays applying for mythical jobs.  They could be literary critics of their own narratives.  But they couldn’t bubble accurately with a #2 pencil.  And since this, for some reason, is still considered a necessary skill at which to exceed, my students needed to be masters of their own bubbling prowess.

So for the next MMA, which we took last week, I had a ticker tape on my whiteboard scrolling over and over, “Use Your Bubbling Power Wisely.”

Now, I’m not so modest as to say that my teaching skills had nothing to do with their improvement.  After all, I was also included in our class and individual reflection.  I modeled my own first, of course, before expecting them to understand it was safe to do so.  I also identified some strategies that I could do to address their gaps. We have covered more during 2nd quarter than we did during 1st quarter.  The kids too are also developmentally more ready for the level of exams.  But I certainly didn’t change my teaching philosophies or my insistence that collaboration and student-driven, differentiated instruction is the key to student engagement and success.

But between the 1st MMA and the 2nd MMA, the students in my Advanced category jumped 40%.  My Far Below Basic students were represented by no more than 1 student in each class.  And my Proficient numbers increased as well.

And that’s just the beginning…

When it comes to Test Prep, there’s no magic bullet, but there’s also nothing you shouldn’t consider.

« Is EdTech changing how students think or is it addressing the changes in student thinking?
How Do You Manage Your Online Communities? »