The Illinois News-Gazette recently reported an increase in second career teachers.  But, really, aren’t we all second-career teachers?  I mean, unless we bopped from high school to a BA to an education program and landed directly into the teaching field, surely we “were” something else in our lives before teaching…and surely this past civilian life contributed to who we are now in the classroom.

I was flipping channels and caught a few minutes last night of Judy Garland, buttons and bows, skipping down her yellow brick road to the Emerald City.  If only everyone’s path could be so neatly laid out for them.

My Yellow Brick Road to teaching was crumbly and unrecognizable as any kind of path at all.  I graduated from a liberal arts program, and went out into the world just excited that I didn’t have any more homework.  Had I only just looked at my degree, I could have read the signs.  With an English degree that specialized in both Creative Writing and Renaissance Literature, what else could I be but a teacher?

So let’s open up my proverbial photo album of jobs and check out just what my path was to becoming a teacher.  Maybe it will inspire you to also take a walk down memory lane and mull over the path that led you here as well.

2 years old: my father, the once-producer of The Price is Right, hires me as a toddler model for that week’s grand prize, a carousel.  What did this bring to teaching? Something funky to talk about in the classroom during my Find a Fib activity.

15 years old: I’m a production assistant on any number of my father’s game shows.  I run errands, answer the big blinking red phone on the floor of the studio, and set out the veggie tray.  What did this bring to teaching? Someone once said there are only two people on a production staff that know everything: the producer who orders everyone around, and the PA who is ordered around by everyone.  It teaches you humility and empathy to be at the bottom.  In addition, I learned to say yes first and then figure it out.  Nothing’s impossible.

17-18 years old: CIT and Counselor at a Camp Hess Kramer and Gindling Hilltop Camp (clap-clap) What did this bring to teaching? I now have tons of circle & clap games up my sleeve during earthquake drills.

18-20 years old: Retail (the Express, Westminster Lace, Teeze, The Limited, etc.) What did this bring to teaching? I learned that I never, ever wanted to work retail again, so I sure as hell better find a career.

21 years old: Assistant editor at a music video company.  I once toyed with the dream of working all alone in an editing room, just thinking about footage and pacing.  What did this bring to teaching? Well, actually I think a lot about this job every year when I teach narrative.  To practice my editing skills, I remember taking footage of the movie Highlander and editing it together to the beats of the Queen song that appeared in the movie.  I not only had to pace, create rising action, tone, etc.., but I was exposed to technology for the first time.  Little did I know that technology would play a big role in my future life as an educator.

22 years old: Production Assistant at Disney for a movie company.  What did this bring to teaching? Since they figured anybody could teach 2nd grade, these producers I worked for asked me, a production “ass”, to come on location with them as a tutor for their 2nd grader.

They hooked me up with the private school their daughter went to, and I set up a classroom in the corner of our room at the Ritz in Chicago, learned just enough French to conduct lessons to keep her up in school, and prepped the entire 2nd grade curriculum for the fall.  I repeat, I didn’t know anything about teaching; I just knew how to check her parents’ sushi order before delivering it to their trailer.

I took the kid to the aquarium, the zoo, and the museums.  We used the city as our school.  I must admit, I was not the best production assistant around, and believe me, these producers let me know it.  I will say this, however: they undeniably put teaching on my radar for the first time, and for that, I am grateful.

But I didn’t work too hard, which kinda disturbed me because I knew that if I continued to be unchallenged, my ability to meet challenges when they came up would be stunted.  But it was through them that I began being interested in politics, policy, and law.

You see, these producers were friends with Clinton during the whole “Travelgate” thing. So even though I was only involved on the entertainment side of things, I somehow found myself sitting face-to-face with the future White House Chief of Staff, Rahm Emanuel, who coached me prior to my phone interrogation by Kenneth Starr.  Needless to say, they discovered what I told them all along: I knew nothin’ ’bout nobody.  What did this bring to teaching? I learned that there are politics everywhere, and that nobody’s got a golden hue who aspires to the top.  That is, even the best administrator plays a game to get to the top of their ladder. I don’t pretend that the game doesn’t exist, I don’t complain that it does, and more importantly, I’m not threatened by those who play ball.

26 years old: Publicity at CBS, Television City.  I was actually the tape whore.  I made the clip reels for the news outlets.  I was in charge of contacting the T30 (top 30 news outlets in the country), worked the press junkets for the affiliates, and budgeted the editing bays for the department. What did this bring to teaching? I worked with white collar and blue collar, with CEOs and those who turned off the lights at night.  I also learned about the power of the press.  I learned how to write a pitch letter.  I learned how to persuade.

It was also during this time that I searched for what my true calling was.  Once again, I found myself in a chapter where I wasn’t working hard, I was a clock-watcher, and I was miserable in being just fine.  So I sat down and made three lists, a chart that would help guide me to choose a path more worthy of what I could do. 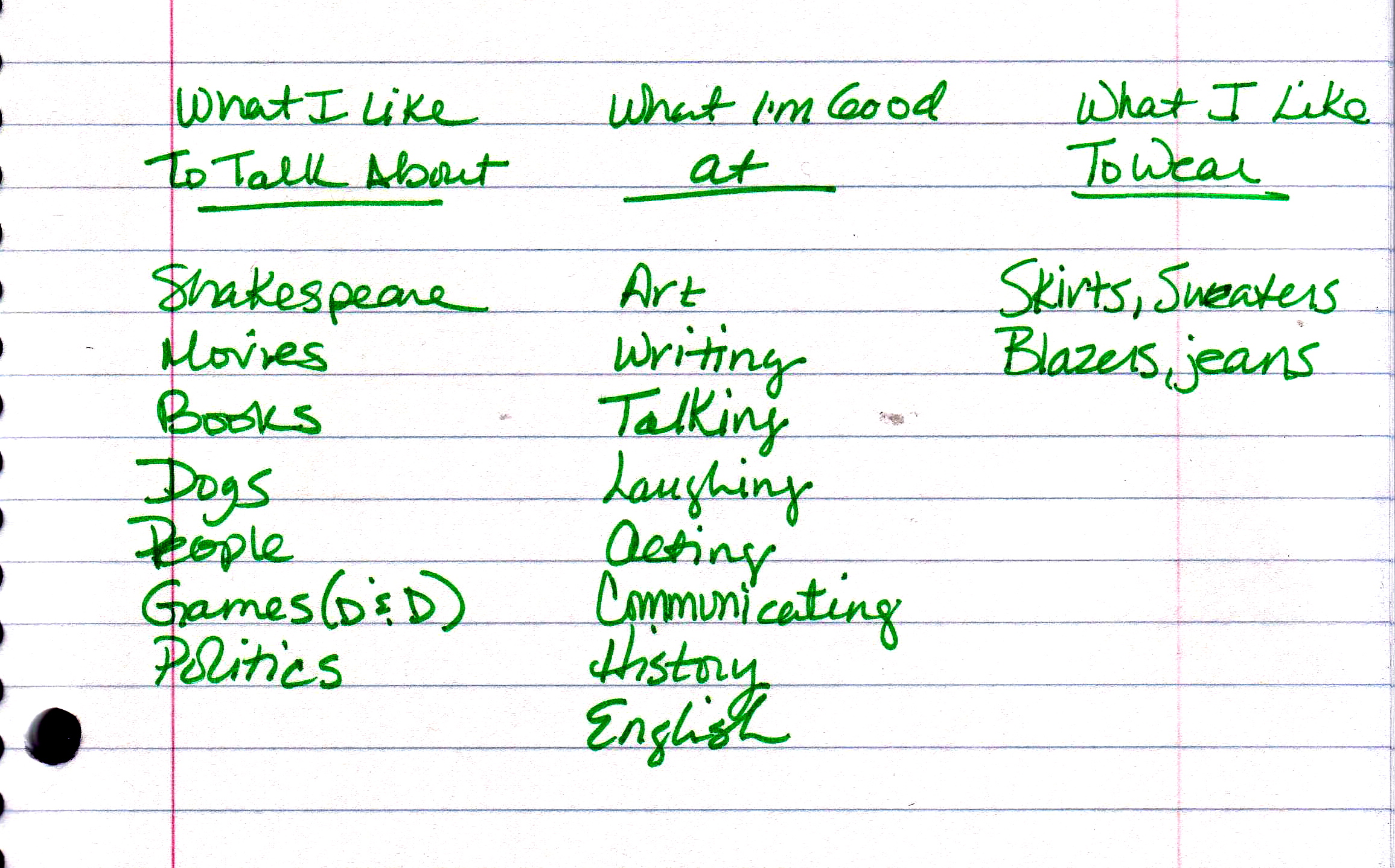 Hey, that last category was important!  I was never a nylons-all-day kinda gal, and if I wanted happiness during my day, it meant looking at myself squarely for who and what I was, and finding somewhere that would appreciate what I had to bring to the table.

All arrows pointed to teaching.

The lightbulb went off over my head, my eyes got glazed, and I never stopped moving forward.

I’ve never worked so hard or been so happy.

28-30 years old: I soon got a job moonlighting as a tutor for a NBA star’s kid, and this led to my first real teaching gig as a co-teacher in a progressive private school.  I taught during the day and went back to school at night to get my credential.  I paid my tuition by directing children’s theater and tutoring on the weekends.  I busted my ass because I was called to it.

Did I find teaching or did teaching find me?  I don’t know.  But teaching and I walk hand-in-hand now, down a road together, never one without the other.

What was your path?