My Struggles with Tenure

I’m really struggling with my feelings about tenure. Currently, the conversation goes as follows:

When, in fact, it should be:

It’s true. How can our current system be effective if just about anyone can receive a reward as incredible as the equivalent of a job shield? Heck, even in World of Warcraft you have to be at a certain level, and prove a certain amount of ability, before being awarded the shiny plate armor. So how is it that any teacher who merely makes it past level 2 without running, screaming from the job, gets the grand prize? 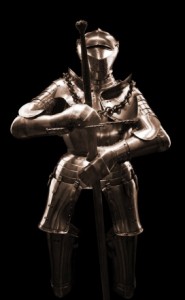 Right now, we don’t get raises that meet even a fraction of COLA, but somehow after year 2, we get the grand Poo-bah of all rewards: job protection regardless of job effectiveness? That’s quite a leap.

So in today’s post I’m toying with an idea for tenure reform. Notice I’m not saying tenure termination. I believe in the reasons we have tenure, but I also believe it is being over-used and taken for granted.

After all, seniority does not a great teacher guarantee, just as being green does not equal being expendable. And let’s face it, when faced with our recent wave of budget cuts, tenure protects many who’ve just managed to fly under the radar for their first two years, while forcing out newer teachers who may have the potential to glow with calling, if only given the opportunity.

But it’s not as cut-and-dry an issue as those outside of education would have us believe.

Why We Need Tenure

I’m grateful to tenure for protecting a very dedicated and self-sacrificing group of professionals. We teachers give our blood and sweat to helping other people’s children, even if those other people don’t help their own kids. We are underpaid and overworked. We are taken advantage of and taken for granted.

Without tenure, a 30-year teacher who has proven himself able under 6 school administrations can be fired under the 7th simply because of a conflict of learning styles.

Without tenure, the most experienced and proven educator, someone who has put in years on a district pay scale, could be fired simply to cut costs in order to hire a newer, unproven teacher.

Without tenure, a teacher would be less likely to try a new book or lesson that strayed from the district vision, even if that vision was flawed, and even if that supplemental material was exactly what that teacher needed to reach the kids in her classroom.

Without tenure we could not use criticism to improve our profession.

Without tenure, our vulnerability might drive our choices, allowing our fear of standardized test scores to drive our curriculum, rather then adding the critical thinking skills into our lessons that we know our students truly need.

Tenure is not so much a perk as a shield that allows us to teach through the ebb and flow of trends and fads brought in by oft-times nomadic administrators. It gives us the ability to have an unthreatened voice to stand up against the grain, supporting students nobody stands up for. It allows us to retain our positions through our own pregnancies or mournings, to stand up against lawyers pitted against us by litigious-eyed parents, or by the occasional student with lying on their tongue.

Why Tenure is Frustrating

Mind you, most of the time, tenure doesn’t save the criminally bad teacher. No, the fact is that there is a due process to rid the system of those few teachers, and not enough districts choose to go through that long, pricey, and arduous process. (For that matter, not enough credential programs serve as initial gatekeepers either. But that’s for another post.) Instead, tenure as it exists now, protects a far greater majority of teachers, those who are (or who choose to remain) mediocre.

These teachers are neither here nor there. They show up to do their job, but are not interested in being great at their job. There’s nothing in their record that can justify getting rid of them; but does that teacher really deserve the greatest reward this profession has to offer?  This is the picture of the teacher tenure typically ends up protecting.

After all, what this can mean is that once teachers have achieved tenure, there’s no carrot in front of them to encourage self-improvement save for their own intrinsic motivation.  And for many, it seems, that’s a lot to ask.

So I remain torn. Tenure is a tragedy in some cases and a savior in others. My confusion lies in the existence of such a black-and-white rule in a world of gray.

What This Battle Really Is About

Just as we differentiate our lessons and our assessments, I’m thinking that there should be gradations of reward for a job well done starting with a competitive base pay. And these rewards should be judged by a series of multiple measures…with tenure as the Holy Grail for being great at the job, regardless of one’s seniority.

But who decides what a teacher has earned, and how does that person decide it?

It is undeniable that the heart of this tenure battle is really in how we evaluate teachers. For if we had better ways to gauge the gradations of talent in the classroom, we could better sculpt the teaching force that we need in our schools. If we had more effective ways to pay and reward teachers that better reflected the abilities of the individuals being evaluated, we could better develop members of our force who remain dedicated to their own professional evolution as educators.

Currently, there are great, talented educators out there working hard to propose solutions to issues involving teacher evaluations. Teachers like David Cohen and Anthony Cody of the ACT ning (Accomplished California Teachers) who are busily working on proposals to help guide our industry in how we evaluate teachers formatively with the purpose of appropriate reward, using “good evaluation as a system that improves teaching.” Teachers like Renee Moore who makes sure there are teacher voices at the most important of tables, disallowing politicos and lobbyists to make major decisions without educator experience being heard.

I’m not sure how they feel about this particular issue of tenure, but I know that the work they are doing will have a direct effect on improving how we are rewarded for our efforts in this difficult profession.

The fact is, I believe a great, new teacher should be given the respect of being wooed with everything in education’s power to retain that teacher. I believe that veteran teachers who are still awe-inspiring in their ability to reach out to generation after generation of students should also be given whatever we can to reward their ongoing efforts. I believe that experienced teachers willing to train those new to our profession, passing on their knowledge and experience, and helping to prepare our next generation of educators, should also be offered whatever we can to reward and encourage their continued support.

But I believe too that teachers, regardless of their years in this profession, who still struggle to prove their effectiveness, should still feel the pressure of having to improve their craft.

And, bear with me here, I believe that those who have tenure should have to continue to prove they deserve it in order to maintain it.

The bottom line is this: tenure should be a precious thing. There should be a process to receive it. It shouldn’t be granted just because you made it through the first two years without offending anyone.

It should exist. It needs to exist. But it should be awarded to those who have earned the shiny plate armor.

« The Inconsistency of School Administrations
Teacher by Day, WOW Warrior by Night »