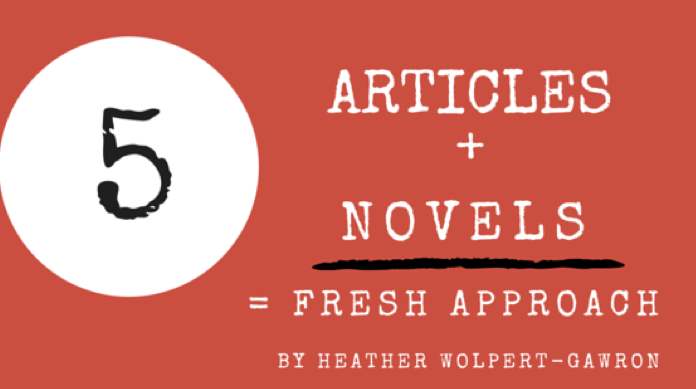 Pair with: Freak the Mighty

Why: The two main characters in the book form a symbiotic relationship, each utilizing the other’s strengths to protect themselves from the social and academic world around them. Doesn’t every middle schooler want a friendship like that?

“Body image doesn’t just happen. It’s a complex phenomenon influenced by many factors, including parents, peers, and social contexts. But we know that media messages play a powerful role in shaping gender norms and body satisfaction.”

Why: Uglies focuses on a future world where a surgical procedure to attain the perfect face and body are a rite of passage for every tween. But what happens if a young person decides that future has its drawbacks? Uglies explores our perception of perfect and what a society of image-obsessed citizens might give up in their attainment of beauty.

“For years, archaeologists have wondered where her tomb might be hidden. Nefertiti belonged to the family line of the famous King Tutankhamun, better known as King Tut. Indeed, some believe she was Tut’s mother. While the other royals in her line are all accounted for, Nefertiti is still missing.”

Pair with: The Red Pyramid

Why: The Red Pyramid is a fictional mystery set to the beat of Egyptian mythology. This article, however, chronicles a true-life mystery students can witness that is ongoing right now. Egyptian mythology is fascinating to middle school students, but not surprisingly, so is its history.

“The point, Burns says, is that every story has characters—it’s just a matter of letting them breathe and tell their stories. “You have all of the elements of the progress of characters,” he says. ‘You have the drama of ‘who will do it, who will not,’ and all of these things that go into a good story, specifically. It’s not so much that you manipulate the story to focus on that, but as you’re winnowing it down, these rise to the surface like cream.’ “

Pair with: Nothing But the Truth

Why: Nothing But the Truth uses a documentary-style format to tell a story about an incident that happened in a school, told from different points of view. The article discusses the different ways documentaries capture storytelling and how they can use the characters and the conflict to weave together a narrative without the filmmakers interfering too much in manipulating the reality. Students learn through the article as well as through the novel, that documentaries are all around us.

“Research and advocacy organizations such as the The Sentencing Project have pointed to what they characterize as a “cascade of disparities” throughout the criminal justice system, which includes “uneven policing” that makes it much more likely young black males in particular will be confronted, arrested and detained.”

Why: The students of today will recognize in Monster the themes also found in recent events that have fueled the BlackLivesMatter movement. The main character is a 16-year old in juevenile detention and on trial. Those around him question his innocence and we learn, through flashbacks, of his childhood in Harlem.

« Making, Writing, & Leaving My Wheelhouse: How This Relates to ELD Students (UPDATED)
Eeny, Meeny, Mino, Moe: Which 3D Printer Should We Own? »