I’ve always been a multi-tasker. It frustrated my own teachers at times in that I always needed to be doing two things at once in order to be fully alert. My brain worked like riding a bicycle: if I only moved slowly, my attention span fell over. And during my most recent Edutopia meeting, I was no less occupied.

As I sat in meeting at Skywalker Ranch listening to some of the greatest minds dedicated to education, my head was also in the classroom. It’s true. While I was learning, I was also teaching.

Edutopia’s National Advisory Council consists of multiple classroom teachers who are gifted in their craft and inspirational in their innovation. I listened to such educators as Doug Martin, Anthony Armstrong, Kati Delahanty, and Craig Brandenburg. And all the while I was helping to deliver content and classroom management in my own classroom, 400 miles away.

Twitter allowed me to do it easily. It all began weeks ago as I sat looking down the tunnel that was this upcoming year at some of the months already peppered with conferences, meetings, and what I’m sure will be my own sick days that happen of their own accord. And I thought to myself: how can I still be a presence in my classroom when I can’t be there?

I could create movies of my own teaching, of course. But that wouldn’t be interactive. And it would require my sub to run the technology of the room, and that is it’s own challenge. So I decided that I would try an experiment: Twittering with each class period.

Of course, I had a substitute, a brave soul who stood in my room and supervised, making sure there was actual follow-through and on-task behavior.  But in order to answer the questions she could not, I set up a way to be available to my students.  Here’s how I did it:

1.I picked one “Twitter Captain” per class period (thanks, Will Richardson, for coining the term over Friday’s dinner.) This was a student with a Twitter account who was willing to follow #wolpertsclass. They were also willing for our class to follow them. In other words, they needed to have an account with the understanding of pure transparency that would be seen by their teacher and fellow students. (That weeded out some volunteers, let me tell you.) You can also set up a Twitter account for this purpose. You decide.

2.I explained the rules. The Twitter captain was both my voice and the voice of my classroom. They are stationed at the computer, and they know that if something inappropriate is written, I will assume they wrote it because they are the only ones allowed to physically Twitter to me at this time.

3.The Twitter Captain logged on. At the start of 1st Period, my Twitter Captain opened up their account on one student computer (my classroom has three eMacs rescued from being recycled through our district warehouse after our old lab was dissembled.) I petitioned to have Twitter unblocked last year through our Director of Technology so we could use it in the classroom. See my earlier post here.

4.I logged on from my end and began my interactive Twitter Q & A. I asked questions I knew of the students who were in that room at the time, and they asked me questions about the content. When a student had a question, the captain posted it and let me know who had asked. 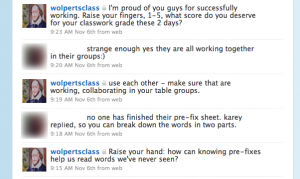 Was it all miraculously rosy? Of course not. After all, Period 3 seemed to use Twitter as a high-tech tattling opportunity.

Brandon’s out of his seat and walking around. (44 characters)
Armando won’t stop talking even though Ms. D is telling him to be quiet.(75 characters)

I then reminded my class using my 140 character limit that Twitter was for content correspondence and questions.  And according the the sub notes I saw when I returned, the students then got back on task with a grumble.

I think the moment that I’ll find most memorable, however, was the Tweet I sent down the length of California that proved my teacher antennae was still raised and receiving.   Without a tip that it was needed, I told my Period 2 Twitter Captain to tell Christopher to stop talking. She replied with, “How did you know that Christopher was talking?!”  I also earned an “OMG!” and a “HaHa” for my efforts.  (After all, it doesn’t hurt if your students think you’re psychic every once and a while.)

Overall, it was an experiment that sent some important messages:

It sent the message that I was still thinking of them and still engaged, and that I expected them to be as well.

It sent the message that I was always willing to try something new to keep them learning.

It sent the message that learning doesn’t stop on days when I’m not there.

It sent the message that my voice can be heard whenever they seek it out.

It sent the message that their own learning need not to occur solely within the walls of their classroom.

I also shared some of what I was learning as a means to convey my own excitement at being a learner.

My classes I went on a journey, experimented together, and learned together. And as a result, those sub days were not the lost instructional days that they might have been. In fact, because I managed to bring in a new, fresh method of content delivery, it may have even been more valuable then our average day.

Keep trying new ways to deliver content to your classes. It may not work 100% of time, but sometimes it’s your enthusiastic attempt that encourages their continued learning.

« Teacher by Day, WOW Warrior by Night
What Kind of Relationship Will I Have With My Child’s School? »