Lessons Students Can Learn From Mick Fanning vs. The Great White Shark

What’s with shark videos? First it was the uniqueness of Left Shark in the Katy Perry halftime show. From him we learned to dance to your own groove, even in front of millions of people

And now we have the mighty Mick Fanning whose video of him punching down a great white shark has gone viral in the best of ways. His has quickly become a household name, and what he did puts him high on the superhero-o-meter, as far as I’m concerned.

But what can students learn from this bizarre moment? Because it was caught on film, it makes it a particularly rich resource for visually teaching the following concepts:

Let’s break it down:

1. First of all, the mere fact that he’s a professional surfer is a teachable moment that can begin conversations about Persistence, Dedication, and Finding one’s passions. He had to practice for years to get to the level in which he competes. Here’s a video of his Semifinal run during the J-Bay Open event as evidence of his surfing ability.

2. Now in the start of the shark attack video, you see brief glimpses of the shark, and using science, students can probably predict the approximate size of the creature based on the distance between the dorsal fin, the presumed tail fin, and the shadow in the water: 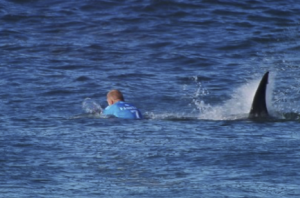 3. It’s at this point that Fanning turns and takes care of the problem himself. He gets pulled off the board and hits the shark in the back. “Fanning’s still swimming in his own right,” towards the beach and “is still in the water,” declares the event’s announcers. It’s important to mention to students that when tackling their own issues in the classroom and in the world beyond, it will be up to them to ultimately fight off their own demons, fight their own battles, and help themselves to solve their own problems first before seeking help from others. Bottom line: Mick Fanning had to beat back the shark independently or he would not have survived. He pulled from a strength he most likely didn’t know he had, at a time when he least expected it and hadn’t planned for. Problems will not wait until you are ready to tackle them. You have to pull your solutions from yourself when you are sometimes least ready for them. 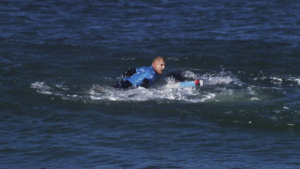 4. And that’s when his peers and friends bolt to action. For while he fought off the shark single-handedly, Mick couldn’t get himself to safety without the help of others. And it wasn’t just the life guards coming to his aide; fellow competitor Julian Wilson was also rushing to his rescue as Fanning was pulled under: As Fanning reported to Surfer Magazine about Wilson’s involvement in the event: “I was yelling at Julian to get away but he was coming towards me to help. What a legend. Then I was just readying myself for it to come at me again so I turned around, hoping I could at least see it coming. And then before I knew it the boat was there and I was safe.” (We won’t mention for the sake of the lesson that recent news reports that the photographer was left behind while Mick was rescued. Yikes.) 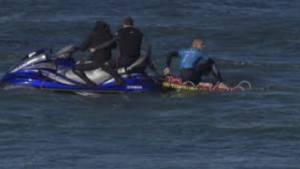 5. Finally, the end of the story is about Brotherhood and Sportsmanship itself. For while this event was in its final heat between Fanning and fellow star surfer Julian Wilson, the event was called off and both athletes split the prize. In his message following the attack, Fanning called Wilson “a warrior.” 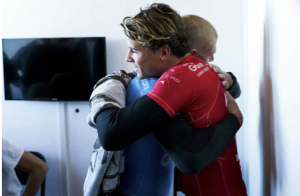 From here, you can talk about other athletes who have made heroically humane choices over competitively inspired ones. Here’s a link to a Sydney Morning Herald article that lists a number of possible moments in sport history.

6. As follow up, you can have students create memes from the event that can focus on different kinds of moments and points of view. Will their meme be from the point of view of the shark like this one? Or will their meme be about heroism and Fanning’s amazing act like this one? Use free tools like Memegenerator.net to have students hone in on a particular concept and use meme generation to help teach getting to the gist of that concept.

7. Update: Here’s a great video that was done by 60 Minutes Australia in which Mick Fanning still stands by his respect for great white sharks.  Should we begin to cull and hunt them?  No, he says.  “We are in their domain.” http://www.surfermag.com/videos/mick-fanning-on-60-minutes/#7O7xmsrKJHZ4FeKD.97

There’s much students can learn about the events going on around them in the world beyond school. Use what’s in the news and what’s become pop culture to teach the kids anything from core content to character traits.