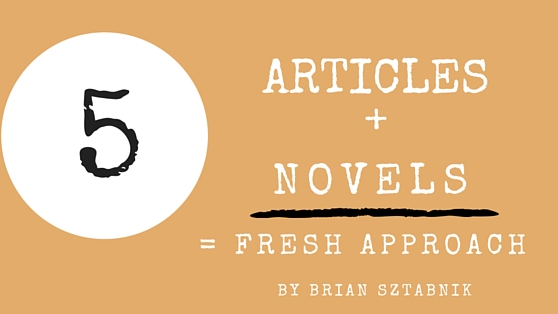 Published on: The Atlantic

“My bet is that when a comprehensive inventory is made of my generation, it will be found that not one person from a smart kids’ class was ever expelled from a Catholic elementary school. If there was trouble to be had—stealing wine from the sacristy, sneaking into the basement to smoke cigarettes, peering up the stairwells at girls’ underpants—the dumb kids got there first.”

Pair it with: Lord of the Flies

Why: An interesting activity would be to have students categorize each character in the novel — where do they belong in the smart-kids’ class or the dumb one?  Ask your students what each character would have learned from being labeled as such and how that is evident in the text.

“This was the most common regret of all. When people realise that their life is almost over and look back clearly on it, it is easy to see how many dreams have gone unfulfilled. Most people had not honoured even a half of their dreams and had to die knowing that it was due to choices they had made, or not made. Health brings a freedom very few realise, until they no longer have it.”

Pair it with: Any novel in which a major character dies

Why: It is a worthwhile exercise in critical thinking to consider the five regrets of characters such as Jay Gatsby, Tom Robinson, Macbeth, Hamlet, Piggy, etc.

3. The Things That Carried Him

“The seven soldiers stood in a stiff line and fired three volleys each. This is a part of the ritual they practice again and again. The seven weapons should sound like one. When the shots are scattered — “popcorn,” the soldiers call it — they’ve failed, and they will be mad at themselves for a long time after. On this day, with news cameras and hundreds of sets of sad eyes trained on them, they were perfect. After the final volley, Huber bent down and picked up his three polished shells from the grass.”

Pair it with: The Things They Carried

Why: Because students need to understand what it takes to bring someone home to their final rest and the loss that is felt by everyone involved in the process.

Published on: The New York Times

“Speech followed tempestuous speech, the enraged crowd roared with approval, and then someone suggested that we all go to the construction site and tear down the chain-link fence that had been erected to keep out trespassers.”

Pair it with: Animal Farm

Why: When we seek to redress grievances, what do we learn about the institutions we challenge, our efforts, and ourselves?

“Don’t be under any illusions … ALL of them want you because they’re making money off your youth and your beauty … which they could not do except for the fact your youth makes you blind to the evils of show business. If you have an innocent heart you can’t recognise those who do not.”

Pair it with: Heart of Darkness

Why: Exploitation takes many forms. Conrad witnessed the exploitation of Africans by Europeans. Here, Sinead O’Conner warns Miley Cyrus that “whoever is telling you getting naked is the way to do that does absolutely NOT respect your talent, or you as a young lady. Your records are good enough for you not to need any shedding of Hannah Montana. She’s waaaaaaay gone by now … Not because you got naked but because you make great records.”