I commented on Joanne Jacobs article, “Stop Facilitating and Start Teaching,” based on Fred Strine’s article in the Seattle Post-Intelligencer.  Strine indicates that more student-centered teaching is somehow less taught and, consequently, less learned.  Jacobs paraphrases that the “‘sage on the stage’ is more effective than the ‘guide on the side,'” that students of today lack the discipline that they had in his day, as if handing over the ownership to the class is handing over the reins entirely. 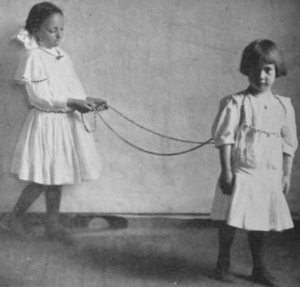 Not so.  In fact, handing over some power to the students: the power to intrinsically learn, the power to think critically, and the power to understand their own metacognition and the role it plays in learning, is, well…empowering.

I commented as follows:

I just saw Doug Fisher speak at the UCI Writers Project (of which I am a Fellow this summer). [see my post:

Collaboration…Blocked by a Firewall Near You.]  He very clearly says that Focused Instruction should be only a fraction of the actual instruction, leaving room for Guided and Collaborative Instruction to take place.

We cannot have the expectation of differentiation, of learning for ALL, and not use collaboration or peer-teaching. It is a tool and one that must be employed to reach some students. This isn’t just an issue of engagement, but of achievement.

Collaboration, peer-teaching, and a student-centered environment are not NOT disciplined. In fact, the level of engagement in a class with a teacher that knows how to use these strategies is not only higher, but the instructional time is more efficient.

The teacher-centered disciplined teaching that “used to work” earlier in his career is false. It didn’t work and it surely does not even until this day. It was used because of what we didn’t know then. There is no excuse now. It is still not used as often as it should be because it is a more challenging road to teach. The past was not better. It was, however, most likely, easier.

You know, Strine, there’s this thingy called brain research.  We’ve been doing it for some time now.  And just because we used certain strategies years ago, we cannot in good conscience not update our strategies based on what we have learned since.

Strine uses some misguided examples in his article.  For one, he claims that with the “advent of teacher as facilitator, respect for teachers in general has declined.”  Strategies aren’t the reason respect for teachers has declined.  For one thing, everyone thinks they can teach because they, themselves, were once taught.  That’s like saying that “I was born, therefore, I understand childbirth.”  On another note, I also happen to believe (as many of you know that read this blog) that teachers don’t do themselves any justice in the “respect” category by working for free (see my most recent post on this subject).  In addition, with the support for teachers being at a low, it seems a profession of individuals constantly swimming upstream.

It is, quite frankly, popular to demonize teachers.  If people didn’t, they would have to find other reasons for their children’s failures.  Which brings me to his next example.  He writes, “Seventeen pregnancies in one Gloucester, Mass., high school! Doesn’t sound like those teens learned much from their sex-ed facilitators, does it?”  What did the sex-ed teachers have to do with it?!  Um, actually, it was the school that put 2 + 2 together.  It was the girls, their parents, and their town that was at fault, not the school.  It was, in fact, a homeless man living in a nearby park that apparently empregnated the majority of those willing girls.  Why the hell is Strine blaming the school when the girls, the families, and the rapist are clearly to blame?  The answer: it’s the easiest place to point the finger.

And a teacher-driven, forward-facing school model is easier too, but it isn’t the most successful way to educate.

« Collaboration…Blocked by a Firewall Near You
The Carnival is in Town – #179, that is »