How to Battle Epic Paragraphing – updated

I originally wrote this post some time ago, but because it is such a problem that a teacher can detect so early on, I thought I would repost it for those who may have missed it on the last go-round.  Hope there are pieces that you can use for your own battle.

Every year my nemesis rears its ugly head: the epic paragraph. Epic paragraphs are those essays comprised entirely of one mega-paragraph with no indentations to indicate transition from thought thought.

I bet you thought your kids were the only ones doing it, eh? But the fact is that tons of students are recruited into its child army. It’s like the swine flu of writing: tons of kids catch it, and authorities freak out when they see it. And it’s our job as educators to battle this plague on our educational houses. 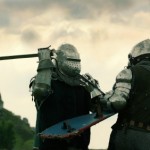 At the beginning of every year, there is a percentage of kids who have had severe cases of knowledge leakage, and we rail at their prior teachers as if they hadn’t noticed the problem, or had chosen not to tackle it. (Don’t pretend you don’t blame the last teacher sometimes. It’s our default reaction when we see silly errors. But fight this urge, because we know this isn’t true).

What is true is that the students sometimes loose the lessons. Sometimes this happens over the summer, sometimes over a mere weekend. And this phenomenon results in the loss of every rule of writing, even something we consider as simple as paragraphing. Which begs the question: maybe paragraphing isn’t so simple.

To us, the divination of ideas seems logical. To writers, the breaking down of thoughts serves to help our readers. To readers, the sight of paragraphs saves our eye from monotony.

But to students, who are novices to reading and writing, even the act of breaking down thought is complex. In fact, when I think about it, they speak in a stream of consciousness sometimes, so why wouldn’t they write in one?

Reading and Writing go hand in hand. We may not all write the next great novel, but I am always floored when I hear about a state not putting writing at the top of their priority list (see Mary Tedrow’s recent article in Teacher Magazine on the subject). I am assuming, of course, that these districts, in an effort to save money, eliminated writing as part of their testing, and because it just isn’t a priority anymore, the curriculum also gets downgraded. Growl.

Frankly, I don’t think the act of writing the “epic paragraph” is a new flaw. I think it’s been around since the years of chalk and slate (of course a student who wrote in epic paragraphs then had to create a stack of slates to accomplish the task). Some colleagues and I at the Teacher Leaders Network were discussing this very subject. And one posed the question as to whether online texting could be contributing to the disintegration of the formal paragraph.

But I also don’t think it is one associated with texting, etc…In fact, reading and writing online encourages breaking readings down into thought chunks far more than other forms of textual literacy.

To solve this problem, I agree with my fellow TLN’er Renee Moore who said rather than focus on the formal 5 paragraph essay, we should be focusing more on teaching ideas. Content over format. After all, if we’re talking 6 Traits here, and we’re really focusing our content on Ideas, then students would understand more about how to break things down AND we wouldn’t be trapped into the 5-paragraph scaffolding year-long.

For, indeed, the 5-paragraph essay (and the 5 sentence paragraph for that matter) are just that: scaffolds. If, by the end of the year, a teacher is still insisting that the scaffolds need to be in place, then the structure is not stable without them and should be held with suspicion.

This year, I’ve spent the year really stressing 6 Traits in a way that I haven’t before. And while I start out using the scaffolding of 5 paragraphs for Persuasive and Lit. Analysis, I pump up the students for the time when we can bust that scaffolding away like the exploding the braces on a shuttle take-off. Then it becomes a reward of sorts to show me and their peers how their organization best realizes their thoughts.

But how to bust?

Remember, it is a common problem, especially in ELL students, and needs specific ammunition in order to solve it:

1. Remember that you are the best writer in the room, so model, model, model. I think it’s important to use any touchstone texts that you can: authors, teacher work, student work, etc…The power of modeling is in the act of writing in front of them, not just in showing them a completed piece. That way you are modeling not only the concentration and effort of writing, but in using Think Aloud, you are modeling the process of writing and the decisions a writer makes. In fact, Renee Moore says she shares “my writings with my students as both models of what to and not to do.” Mary Tedrow says that she uses her own writing, “especially when helping students understand good/not so good feedback, how to respond like a reader, ask questions.” She continues by saying, “I let them review me first. I show all the messy stages, explaining in a think-aloud my rather recursive writing process.” Powerful stuff.

2. Use real-life examples and have students come to the conclusion themselves of why paragraphs are where they are. Then have the students mimic the writing. Both Kelly Gallagher and Jeff Anderson (Everyday Editing, in particular) talk about using mimicking as a means to learn. Have students mimic from the best.

4. For some texture, try showing them some youtube footage of Victor Borges.

5. Use other modalities. Well, I find that in reading aloud, and thinking aloud, we can focus on the problem of epic paragraphing. With voice inflection and stress on those transition words, phrases, and main topic sentences, many students hear the differentiations between thoughts more than if they just read quietly to themselves. Storyboarding thoughts, or comic booking, are effective too. Sometimes it can’t be solved merely linguistically. 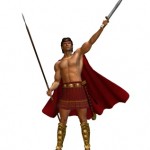 6. Lastly, get thyself to a branch of the Writing Project. Find a teacher to recommend you. Interview. Spend your summer improving your own ability to write and to teach writing. It’ll be life changing. I kid you not.

So don your battle armor, grease up your teaching abs, and go forth and battle the epic paragraph.